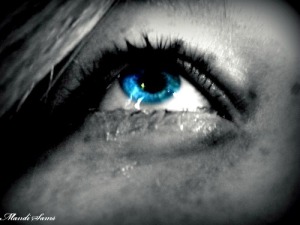 My tears are flowing

Too powerful for words

I close my eyes

His face I seek

A love so strong it hurts

I want to do

Than rest in His embrace

I get to Heaven

And see Him face to face.

As I dove into the Scriptures this morning, I was especially drawn toward the book of Esther. So, I followed the nudge of the Holy Spirit, (of course!) flipped to it, and started reading. I was surprised at how much I was able to actually pull from this book! There were a couple of things that jumped out at me as I read.

1. We don’t have to compete to obtain grace and favor in the eyes of Jesus:

After Queen Vashti disobeyed King Xerxes, he decided that she had made a fool out of him and didn’t want other women to get word of her behavior and think that it was okay for them too to be disobedient to their husbands. So he basically banished her from the kingdom. King Xerxes then appointed officers throughout all of the provinces to gather all of the young, beautiful, virgins and bring them to Shushan to begin the process of selecting a new queen. Esther had to work to stand out from many other women in order to obtain grace and favor inn the eyes of King Xerxes.

Thankfully, Jesus isn’t looking for the prettiest, or the smartest, or even the holiest of us! There’s no competition to obtain the Grace and favor of our Heavenly Father, we already have it. If you’ve confessed your sins and asked Him into your heart and to be a part of your life, BINGO! You’ve already won!

““Everyone who calls on the name of the Lord will be saved.” (Romans 10:13) Every single one of us is given a chance to obtain God’s grace and favor, not just a select few Bible scholars, or pastors, or Sunday school teachers. The question is, will you take what He’s offering to you? Take on His marvelous will for your life?

That brings me to my second “Ah ha!” moment.

2.We should want to please our King:

Each time Esther (or anybody, really) approached King Xerxes with a petition, she always began with “if it pleases the king…” and continued on with her petition. Shouldn’t we have the same attitude as we approach Jesus with our wants and needs? Instead of coming to Him “Dear Lord, I NEED…” “Heavenly Father, I would really like…” “Lord, would You please…” maybe we should take a page from Esther’s book and only want something if it pleases Him. After all, He knows what’s best for us, shouldn’t we want His will for our lives over our own? I know I do! I’m positive that whatever He wants for my life is WAY cooler than anything I could ever want for myself. I want to live my life to please Him, even when those around me are living to please the world and obtain worldly possessions.

“The thief comes only in order to steal and kill and destroy. I (Jesus) came that they may have and enjoy life, and have it in abundance (to the full, till it overflows).” John 10:10 (AMP)

“You can have all this world, just give me Jesus.” 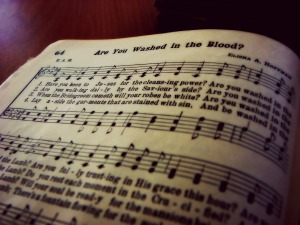 I came to You

Just as I was

You took me in

By Your grace I was reborn

I give my life to You

You laid Yours down for me

The blood You shed

Was blood that set me free

Each day I praise

And tell of Your great love

I can hardly wait

For the wondrous day

We meet in Heaven above

In the darkness
You’re my light

When I’m lost
You’ll be my guide

When I stumble
I know You’ll catch me

You’re always walking
by my side

In all life’s trials and troubles
I hear You whisper “My child, I love you.” 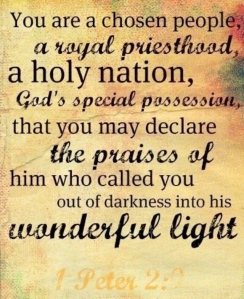 *I took this down because I wasn’t completely sure about the wording, but I decided that even if it’s not quite right, anyone who reads it prayerfully will understand what I’m trying to say and how I’m trying to share the message I got from God through Louie Giglio.*

Last night before bed, I watched a Louie Giglio sermon entitled “The Weight of Worship,” it was the first part of a series called “That We May.” Louie made a lot of great connections and comparisons in his message, but it would take me forever to even paraphrase them all into this blog post. So, I’ll let you go to the Passion City Church website and check out the message for yourself to get all of that good stuff! I’m instead going to skip right to the title of this post and expand on what Louie outlined in that same message.

1 Peter 2:9 says “But you are a chosen people, a royal priesthood, a holy nation, God’s special possession, that you may declare the praises of Him who called you out of darkness into His wonderful light.” The key phrase in that verse is “that you may.” God doesn’t need anything from us, He sent His son to earth to serve us, not to be served by us. Louie used this verse in his message to basically say that it’s a privilage to be people for God, to be His possession. He’s not embarrassed by our sinful tendencies, He’ll always claim us as His children.

Look at it this way: A religious lifestyle tells us that we “should,” “ought to,” or “can” do something. A relationship with Jesus is a “that we may” attitude. The only thing Jesus wants from us is our affection, and even that He doesn’t NEED to give His away. We don’t HAVE to sing His praises, it’s not that we “ought” to spend time alone with Him in prayer, He’s going to love us whether we do or not. It’s the idea that we may spend time with Him and spread the good news of the Gospel to others. I wrapped my notes up with “you don’t have to, but you may,” and that’s the mindset I’m going to live by from now on. It’s a privilage to be in a relationship and be unconditionally loved by the Creator of the universe, not a list of daunting religious rules and guidelines.

When my burdens are heavy

I fall to my knees

I know my Lord Jesus

Will lift them from me

When the road ahead seems dark

I look for His light

In the midst of my troubles

He’s right by my side

I land safe in His arms

He’ll always be there to catch me

To keep me safe from all harm

“What in the world do the Grace of Jesus and Tide to Go have to do with each other?” You might ask. The title got your attention, didn’t it? I thought it might!

Really though, there is a connection, at least in my brain. I wore a white dress to church Sunday morning, I had no idea there was a coffee stain on the side of it… thankfully it was small enough that it wasn’t screaming “LOOK AT ME! MANDI SPILLED COFFEE ALL OVER ME LAST MONTH!” (Completely forgot about that incident…) Anyway, I got home and my grandma pointed it out to me. “It’s okay, I’ll just throw it in with a load of whites and some bleach, all will be fixed!” Then I read the tag… “Hand wash only, DO NOT BLEACH,” now what am I supposed to do… Later, as I was digging through drawers trying to find some music, I came across a Tide to Go pen, YES! Goodbye coffee stain! I plucked my dress from my pile of whites and started stain fighting.

Wait a minute, my dress, that WAS white as snow, is stained. Jesus blotted out our “stains” with His blood, on the cross. Because of that we became pure, and white as snow. “Liiiiiightbuullllbbb…” (Despicable Me fans? Couldn’t resist…) JESUS IS LIKE A TIDE TO GO PEN! Despite the fact that He ultimately washed us of our sins when He died on the cross, we’re still imperfect. We still sin and end up staining our white garments throughout our lives. We have to go back to Him, repent of our sins, and ask for forgiveness. By no means am I saying that we should take advantage of His grace and forgiveness and use it as an excuse to sin or do whatever we want to, even when we know it’s wrong. I mean you wouldn’t purposely dump pasta down the front of your favorite article of clothing just so you could whip out that Tide to Go pen, would you? I didn’t think so… The Grace of Jesus, like Tide to Go, should be used as a “just in case…” We all still make mistakes, but He’ll always forgive us when we do. Keep Him with you at all times, but don’t sin just because He’s there to quickly blot out your “stains.” The difference? Tide to Go eventually runs out, the Grace of Jesus never will. (And Tide to Go smells kinda funny…. ha.)

And that is what the Grace of Jesus and Tide to Go have to do with each other!

There was an error retrieving images from Instagram. An attempt will be remade in a few minutes.