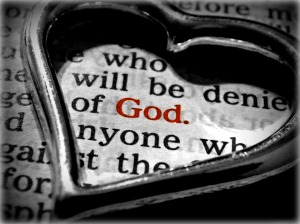 “In the beginning GOD created the heaven and the Earth.” If you’re a Christian, you believe this and sit back and thank GOD for all of His creation. Non-believers, not so much. I’ve watched multiple “Christianity vs. Atheism” debates and they got me thinking. How can one look around at all of the different types of living creatures and honestly believe that every single one came from a single, single cell organism? You mean to tell me that a blade of grass was created from the same cell as a complex human being? I don’t buy that. Even if we HAD, where did the original single cell come from? Even a single celled organism is a relatively complex concept, some intelligent creator had to have come up with it.

It takes a lot of faith to believe that “nothing came from nothing and then nothing magically exploded and created everything,” to quote a poster I’ve come across on a few different occasions. There had to have been SOMETHING to give it all a kick start, and intelligent creator of some kind. Look at the complexity of the human being, for example. All of out functions, the nervous system, the BRAIN. If animals have their own way of communicating, what would have been the point of evolution into speech? Where did the original primates come from? IF they evolved from that single celled organism, than how did, snakes for example, come from the same one? Babies start out as a single cell, but they end up a single body! IF that single cell did in fact turn into a single organism, how then did a SINGLE organism reproduce to give more life forms the chance to take control of different environments and “evolve” to fit that environment?

What about miracles? How would those happen without a being greater than us? The children who claim they’ve seen Heaven and recall loved ones that they never had the chance to meet, answered prayers? You can’t tell me that those are coincidental occurrences. There are things happening all of the time that have no explanation, scientific or otherwise. We believe the ancient writings of philosophers such as Aristotle, Galileo, Plato, Socrates, yet people brush of the writings and teachings of Jesus Christ to be false/fiction. I don’t get it. I’m not saying that YOU have to, but I firmly believe that JESUS CHRIST died on the cross to save me from my sins and give me a fresh start!

There was an error retrieving images from Instagram. An attempt will be remade in a few minutes.